The series picks up a few days after it left off. Jeremy (Greg Bryk) found out that James William (James McGowan) was actually his father, Malcolm, Logan (Michael Xavier)'s girlfriend, Rachel (Genelle Williams), who is pregnant with his child, was kidnapped by Malcolm, and Elena (Laura Vandervoort) found Philip (Paul Greene)'s severed head in her bed. Season two doesn't slow down from there. The pack must hunt down and kill Malcolm or Jeremy must step down as Alpha.

Season two brings a new supernatural element to the show as witches are introduced. The Pack meet two witches are willing to do what they need to get what they want, even if it involves hurting werewolves, who they say they want to help. The worst part is, there is someone or something much much worse out there, something even Malcolm's afraid of. 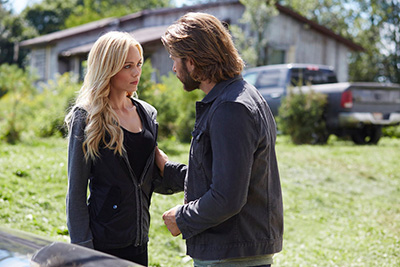 It is also interesting to see other wolves from outside the Pack to argue politics and cause problems for the main characters. We didn't get as much about Pack politics last season.

This season is much darker in tone than season one. There is a lot of blood and gore and even Elena is much less hesitant with taking her revenge (which made for an awesomely gruesome scene). I think that the shift has made the show feel more dangerous and the stakes higher.

I'm really happy with the introduction of the new witches. The Pack is not sure who they can trust, and neither is the audience completely, which I very much enjoyed. It's also great to learn about some of what witchcraft is capable of in this series, and I especially liked Clay (Greyston Holt) going into professor mode to find answers. 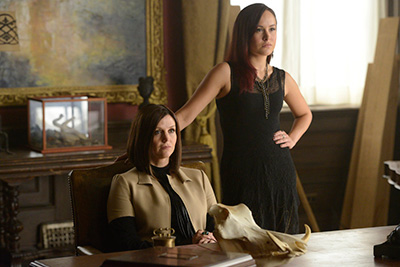 I also like the fact that the main battle this season is not just between Jeremy and his father, which is what I expected. I quite like the turn it has taken this year.

I'm glad that Elena has chosen Clay, but also that she hasn't completely moved on. Philip's death is still affecting her, which makes her fast jump to Clay more believable.

One of the main parts of character development I felt the most satisfied with in the first two episodes was Clay. More of his backstory is revealed, and what Clay learns will change him. 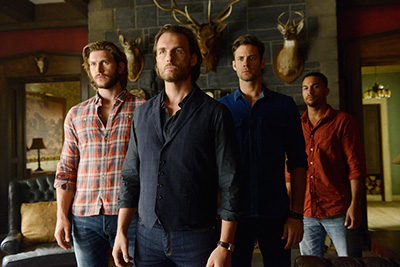 I also am anxious to see Rachel's safe return and what goes down when Logan moves with his plan to take her far away from Jeremy. He has to know that Logan isn't going to follow Pack law at this point. Not only that, but Rachel's kidnapping is interesting in and of itself. There may be much more to it than viewers have been led to believe.

I really love the way the show is heading this season and can't wait to see more. Bitten is back and the showdown between wolves and witches is on. Be sure to tune in tomorrow night on Syfy.
Twitter
BotonSocial por: SocialEmpresa
Category: TV Reviews & Recaps