Wait, you thought he was gone?

Today, Netflix unveils the premiere date and key art of the revived fan-favorite series, LUCIFER, with a teaser showing the devil living his best life in Los Angeles (which looks not totally unlike a Dior ad).

On May 8, 2019, all hell breaks loose (again!) when Netflix premieres Season 4 of Lucifer, the cult-favorite, fantasy comedy-drama about fallen angel and ex-Lord of Hell, Lucifer Morningstar, a Los Angeles nightclub owner who expertly deploys his devil-may-care attitude while moonlighting as an LAPD consultant.

Reeling from the aftermath of Chloe seeing his devil face, Lucifer faces a new challenge: Eve, the original sinner herself, is back. Does she want revenge for when he tempted her out of Eden oh so many years ago… or something else entirely?

Lucifer is produced for Netflix by Jerry Bruckheimer Television in association with Warner Bros. Television. Jerry Bruckheimer, Jonathan Littman, Joe Henderson, Ildy Modrovich, Sheri Elwood and KristieAnne Reed are executive producers of the series, which was developed by Tom Kapinos and is based on the characters created by Neil Gaiman, Sam Kieth and Mike Dringenberg for Vertigo, from DC Entertainment.

Making their debut in Season 4 are Inbar Lavi as Eve and Graham McTavish as Father Kinley. 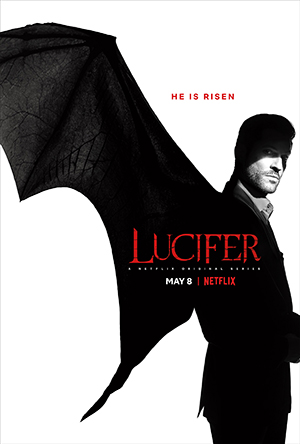