FEAR, or Fear Everything and Run, which is now available to own on DVD and Digital, takes place in an apocalyptic landscape after a pathogen has been released and cities are zoned and sealed off. Ethan (Jason Tobias) and Josephine (Marci Miller), struggle to keep their family, including their daughter, Mia (Cece Kelly), who is on life support, and son, Josh (Danny Ruiz), alive while scavenging for supplies and keeping the dead at bay.

Things go from bad to worse when armed bandits raid their supplies. While defending their home, Joe is hurt, but so is the marauder’s matriarch, Desiree (Susan Moore). After a battle, there is a standoff, and an agreement is made that Ethan will go with Desiree’s brother, Lincoln (Justin Dray), to their camp to get medicine for Joe and Desiree, and everyone will go their separate ways. Of course, things don’t go according to plan, and no one can be trusted. 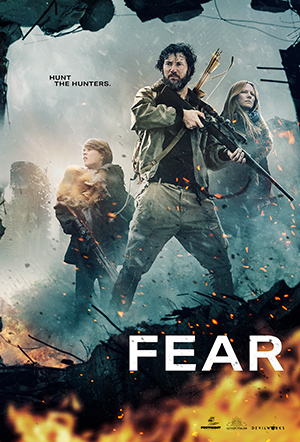 The film’s story comes from star Tobias and Geoff Reisner, who also co-directed the movie. The two previously worked together on the sci-fi action flick Terrordactyl.

Although completed before COVID, the movie plays on the current situation in the world and people’s fears, including mistrust of the government. Although it is a zombie thriller, the story has heart and focuses on the characters’ journeys and fight for survival and what you are willing to do to protect the ones you love. It’s a slow burn and relies on storytelling devices, including flashbacks to a happier time for the family, rather than crazy zombie effects like a lot of similar movies currently out there, which helps to keep the film grounded. The cast was well chosen and the actors play well off of one another, and the locations add to the desolate feeling of the film

Although made with a low-budget, the team used what they had to success. The story itself has an interesting twist and a few surprising moments that help elevate it above similar fare and makes it worth a watch.
Twitter
BotonSocial por: SocialEmpresa
Category: DVD Reviews