Blu-ray Review: Nancy Drew and the Hidden Staircase is a Fun Caper for the Whole Family

Published: Friday, 05 April 2019 14:10 | Written by Jamie Ruby
Warner Bros. Home Entertainment provided me with a free copy of the Blue-ray I reviewed in this Blog Post. The opinions I share are my own.

Based on the classic book series, Nancy Drew and the Hidden Staircase, executive produced by Ellen DeGeneres, follows the sleuth teen as she uncovers a new mystery.

After her mother passes, Nancy (Sophia Lillis) and her father (Sam Trammell) move from Chicago to the small town of River Heights. Longing for adventure, Nancy often gets into trouble trying to help others, as it’s not always in the most constructive ways. It’s the last straw when she retaliates against a bully (Evan Castelloe) after he humiliates one of her best friends, Bess (Mackenzie Graham), and causes property damage. The sixteen-year-old is sentenced to community service picking up trash by Sheriff Marchbanks (Jay DeVon Johnson). 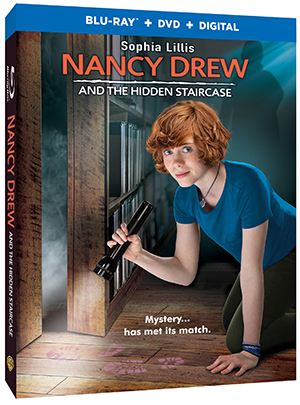 During her punishment, which is overseen by the young Deputy Patrick (Andrew Matthew Welch), she overhears an elderly woman Flora (Linda Lavin) requesting the aid of the sheriff. She thinks her home, Twin Elms Mansion, is being haunted by its original owner.

When the sheriff turns her away, Nancy can’t help but get involved. Flora invites her to stay at the mansion and try to help her solve the mystery. Unfortunately, Flora is the great aunt of Helen (Laura Wiggins), the mean girl whose boyfriend cyber bullied Bess. Regardless, Nancy is unable to resist.

At the house of the odd but kind woman, Nancy gets more than she bargained for when she sees the ghost herself.

Nancy calls in her best friends Bess and George (Zoe Renee) for help. Although reluctant because of Helen, they join in the caper.

Can Nancy and her friends solve the case and stop the ghost before it’s too late?


Although it’s clear the film was made for a younger audience or for families, it still was enjoyable. It does however at times, just in scope seem like a TV movie or one that was made direct to video, even though it was not. While the characters are smart and likeable, it just sometimes feels like something is missing.

The script of the film itself is well written and the mystery interesting. The story has some comedic moments throughout and doesn’t get boring. However, while the mystery itself is well thought out, the character actions and motivations are a bit predictable and silly at times. 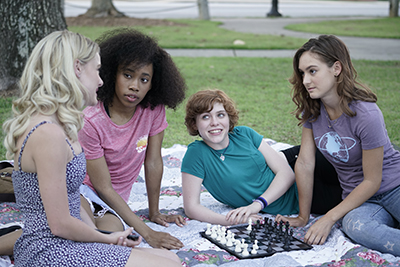 The cast works successfully together, and Lillis for the most part is excellent and convincing as the quirky teen. There are times when she feels a bit over the top, but it seems more likely that it has less to do with her acting and more to do with what she's been given to work with. Sam Trammell and Linda Lavin were also highlights.

The sets worked well and were well built. It was nice to see effects made practically, as it made it more believable, and you can tell that the crew cared about what they were making with all the details.

All in all, although the production value was not as high as it could have been, and the film feels a bit silly at times, overall, watching it was a positive experience, and I recommend it. If a sequel to the movie is made, I will be watching it. 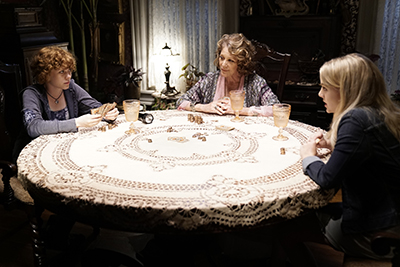 A Sleuth, a Girl and an Inspiration [8:58] - The cast and crew talk about the film being an origin story and what Nancy Drew means to them and how she has been inspiring women for ninety years. Some of them also talk about their experiences with the books. There is also discussion on how she is a role model and influenced a lot of powerful and successful women.

Pink Footprints: Touring Twin Elms [4:44] - Linda Lavin gives a tour of parts of Flora's house. John Collins, the production designer talks about the layers upon layers of set dressing. Producer Jef Kleeman talks about Collins figuring out how to use all practical locations for the house, the moving bookshelf, and the hidden staircase. Collins also discusses how the practical effects in the kitchen work. Lillis also talks about the house and enjoying the kitchen stunt.

Gag Reel [3:13] - This is the normal set of flubs and fooling around. A lot of it centers around the girls laughing while eating donuts trying to film the scene.

The discs come in the normal blue clamshell case with cardboard slip cover. Inside is a sheet with a Movies Anywhere digital code.

If you are a fan of the books, it’s worth a watch; however, if you’ve seen the film and are only interested in special features, it probably won’t be worth it to you. Although they are good, there is way too few. Regardless, Nancy Drew and the Hidden Staircase is a fun film that can be enjoyed by the whole family.