The film First Man is based on the book First Man: The Life of Neil A. Armstrong by James R. Hansen. It tells the story of Armstrong (Ryan Gosling) and his work in the space program and the decade leading up to the first manned mission to the moon, the famed Apollo 11.

The film focuses on not only Armstrong’s heroic achievements, but also his life and more private moments that most people don’t know about.

Although the film from Steven Spielberg, directed by Damien Chazelle, looked beautifully done from the trailers, I wasn’t sure exactly what to expect, as this isn’t normally the kind of film I would watch. However, I’m quite glad that I did. 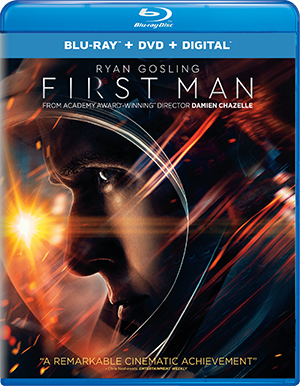 Although it clocked in at just over two hours and twenty minutes and seemed a bit slow in places, for the most part, the movie was quite thrilling. Although I obviously knew the outcome of the Apollo 11 mission, I still found myself captivated by the story.

The tragedy that Armstrong and his family faced over the loss of his young daughter was heartbreaking. Gosling was riveting in his performance and really made me care about what was happening in his life. Claire Foy, who played his wife, Janet, was also a strong part of the cast and helped bring the story to life.

The rest of the cast was also well chosen, and each time one of his astronaut friends died, I felt the loss.

The parts of the actual missions were engrossing, and Chazelle did an amazing job of making you feel like you were a part of it with the first-person shots from Gosling’s perspective. It often felt claustrophobic and frightening with all the creaks and noises of the rockets, yet put me in awe at the breathtaking moments of silence in space.

I also loved how they recreated certain moments from the televised moon landing down to the tiny details. I was not born when the events took place, but the film made me feel like I was there watching the launch in anticipation as much as I felt like I was along for the ride to the moon.

As much as the film was not meant to be educational, I definitely learned a lot, which I appreciated. There is so much more to the story than what I had thought.

I really enjoyed the experience of Armstrong’s emotional journey and recommend the movie.

Deleted Scenes: You can choose to play all or select one of the two scenes:

* House Fire [3:38] - A fire starts in the Armstrong home. Neil rushes back in the
house to find his son Ricky.

Shooting for the Moon [3:41] - This feature is a behind-the-scenes look at making the film. Director and producer Damien Chazelle talks about being approached by producers to make the film and about how he became fascinated in the idea after reading the book. Screenplay writer Josh Singer also weighs in. They talk about the movie being not just about the mission, but also about the man. Chazelle and Ryan Gosling talk about putting the audience in the pilot seat and making it feel real and accurate. Actress Claire Foy touches on them shooting in real time.

Preparing to Launch [3:40] - The cast and crew talk about creating the first film that explores Armstrong’s life and the Apollo 11 mission. With behind-the-scenes footage, they talk about recreating Neil’s first steps on the moon and how he was a hero but avoided the limelight. Interviews include Chazelle, Singer, book author/co-producer James R. Hansen, producer Wyck Godfrey, and cast members Gosling, Foy, Jason Clarke, and Kyle Chandler.

Giant Leap in One Small Step [4:32] - Between interviews with Neil Armstrong’s sons, Rick and Mark, some real footage is shown. They talk about their father. Chazelle and Gosling also talk about Armstrong not considering himself a hero, amongst other things.

Mission Gone Wrong [2:43] - Stunt coordinator Jim Churchman talks about the crash of the lunar landing training vehicle. He and Gosling talk about Ryan performing most of the stunt of being dragged across the field after ejecting himself.

Putting You in the Seat [7:10] - Chazelle talks about wanting to make the audience feel like they were there, giving the point of view of the astronauts. Production designer Nathan Crowley also weighs in. Gosling talks about the experience and also filming in front of an LED screen. JD Schwalm, the special effects supervisor, talks about the technology and how they synchronized the video on the LED with the tracking of the cameras and with the motion base of the shuttle that they could move around however they wanted. Actors Christopher Abbott and Lukas Haas also talk about working with the rig and using the LED screen instead of green screen.

Recreating the Moon Landing [6:02] - Chazelle and Gosling talk about recreating the scene where Armstrong takes his first steps on the moon. Gosling listened to the original audio while he was performing and adding in the lines. Actor Corey Stoll also talks about the scene.

The lights, cameras, and other equipment, as well as filming outdoors at night rather than on a sound stage is talked about. The technology used in the original moon landing is also discussed, as well as how there were alerts during the descent because the computer was overwhelmed by the data.

There are also a few short clips of the original landing compared to clips from the film, as well as discussions about recreating the lunar module.

Besides those mentioned, the bonus feature also includes interviews with director of photography Linus Sandgren and Crowley.

Shooting at NASA [3:12] - Chazelle talks about getting help from NASA and the Airforce. They were able to shoot at authentic locations, such as the landing strip that was originally used, and talk to members of NASA. Interviews with actors Gosling, Stoll, and Haas are included as well.

Astronaut Training [4:03] - The director and the cast, including Gosling, Pablo Schreiber, Ethan Embry, Haas, Chandler, Stoll, Clarke, Patrick Fugit, Cory Michael Smith, and Shea Whigham, talk about getting to experience what the real astronauts did. They got to use simulations and more to get a better understanding of what they went through during a three-day boot camp at NASA.

Feature Commentary [2:21:00] - Director Damien Chazelle, screenwriter Josh Singer, and editor Tom Cross give a behind-the-scene look on filming and other parts of production.

Trailers - The disc comes front-loaded with trailers for the films Operation Finale, Green Book, and Colette, and an advertisement for Universal Parks and Resorts

Packaging:
The combo edition comes in the normal blue clamshell case with both a Blu-ray and DVD disc, as well as a sheet with the digital code for Universal Redeem/Movies Anywhere. On the flip side of the code is another code for Universal Pictures Home Entertainment Rewards to get a free digital movie.

The back of the case does not show all bonus features included.

The film is also available in 4K.

Conclusion:
There are not a ton of bonus features, and I would have liked to see more. That being said, although short, the few that are included with the film were enjoyable. It was especially fun hearing the cast and crew talk about their experiences at NASA and the boot camp. I also found it interesting when they discussed recreating the exact moments of the moon landing and how they achieved that. I’m not sure, however, that the film is worth the purchase for the bonus features alone if you have already seen it in the theater.

The film itself is brilliant and worth a buy. Although I received the Blu-ray edition for review, I would recommend getting the 4K version if you are able, as I can tell that a lot of the scenes in space would have benefited from the extra resolution, if that is something you care about. Regardless, I was very pleased with the film.
Twitter
BotonSocial por: SocialEmpresa
Category: DVD Reviews