Based on the best-selling novels by Val McDermid, Karen Pirie, which drops today on BritBox, follows the title character, played by Lauren Lyle, a brilliant young detective who is given a promotion and tasked with reopening a murder investigation from a cold case which has been publicized recently on a controversial true crime podcast. In 1996 the body of Rosie Duff was discovered by three college students in St. Andrew’s graveyard. Suspicion fell on the students, but with a lack of evidence, the charges were dropped, and the case was never solved. When the case is reopened, someone will stop at nothing to prevent DS Pirie from uncovering the truth.

According to Lyle, who spoke with SciFi Vision during a recent interview, Pirie speaks her mind. “I felt like I connected quite well with her, [but] the hardest part probably is how direct she,” the actress told the site. “I think she's so fearless…She really says it how it is, and she's not got any niceties about it at all…but I did connect with her; I knew why she was doing what she was doing.” 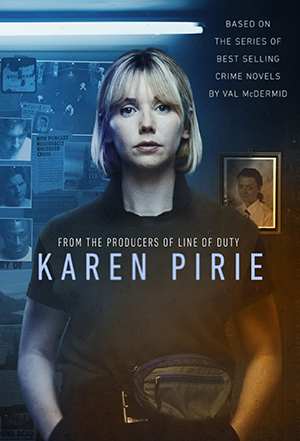 The show tells an important and compelling story. “I really from the get go felt it was so cool that we were telling a story about not just another dead body,” said Lyle. “…She is a woman. We see her life; we see her personality…I felt very compelled that we were telling what I felt was a very important story and relevant story and meaningful and actually said something, and we weren't shying away from sort of, I guess, the controversial nature of the police. Karen’s not the perfect police woman, and she recognizes the things that are wrong with the police as well, which I thought was quite a cool thing to see, especially in the mainstream on something like ITV and Britbox and things where you have to sometimes be quite careful.”

The series deals with some dark subject matter, but balances that with levity, according to the star. “We had a very horrible, dark subject matter that we had to really honor and make sure we respected,” explained Lyle, “but on top of that, you also have this levity that we should be allowed to laugh when situations are absurd…and I think we do laugh. I love that the show allows for an audience to be able to, and that we don't have to all just be dark and sad the whole time; it's just really heavy otherwise.”

To hear more from the star, watch the full interview below, and be sure to check out the series, now available to stream in the US on BritBox.