Tonight, NBC premieres the anticipated new Quantum Leap series. The series picks up some thirty years after Dr. Sam Beckett (Scott Bakula) disappeared after stepping into the Quantum Leap accelerator. A new team has been put together, led by physicist Ben Song (Raymond Lee), to bring the project up to date and figure out what went wrong originally. When Song makes an unauthorized leap without telling anyone, the team, including his fiancé Addison (Caitlin Bassett), who serves as his helpful hologram, is left to figure out why.

The series may technically be a sequel, but according to showrunner and executive producer Martin Gero, who recently talked to SciFi Vision in an exclusive interview, you don’t need to see the original to enjoy and understand the new series. “The great news is, you don't need to do that at all,” said Gero. “Anything that you wouldn't understand will be explained in the body of the episode. So, [it’s] not like a here are the ten episodes you should watch of Quantum Leap to understand it; we're going to do all that work for you.”

He did add, however, that there would be some Easter eggs for fans of the original. 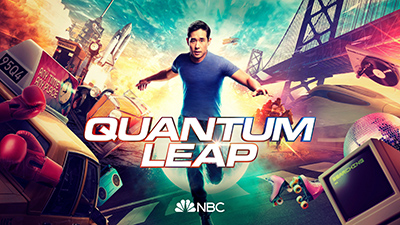 The showrunner said that it is a “balancing act” between making a series that fans will embrace but new viewers will like as well. “We're all huge fans of the original, but we're making a show for people who probably aren't,” he explained. “…Just take all of the legacy away, we’ve just got to make a great TV show…People are looking for escapist fun; they're looking to exercise their empathy, and this show could do both at the same time. So, that was part one. Then, part two is like, aren't we also building something that will honor what went before it and won't have the fans be like, ‘This isn't my Quantum Leap,’ but also, again, not be so deferential to it that we're letting it affect what our primary job is, which is to just entertain?”

The series will also strike a balance with story, having the mystery of the week, but also containing some serialized elements. “I think collectively, just [the] network studio and all the writers, we really felt like the show is called ‘Quantum Leap;’ we want to do these leaps,” said Gero. “We don't want to totally be like [it’s] a different thing now. So, being able to go every week and have a closed ended adventure where Ben jumps into somebody and changes their life and [that of the people around them] for the better, it's still the bread and butter of the show. But I think what's great is now we also get this serialized mystery about like, ‘Why did Ben do this, and why didn't he tell anyone? What the hell is going on?’ That gets seeded kind of in the present-day stories, as well as being able to talk about Addison; obviously, this was her fiancé who doesn't remember her now. So, for her to have space to process what she's going through on the present-day side was important as well and not just be so Ben focused.”

The series will also have a way to show what happens to some of the people after Ben intervenes in their lives. “We actually have a way of dealing with that in the fourth episode, where we kind of explain what it's like for them in a very personal and surprising way,” he teased. “…There's a really beautiful scene that really walks the audience through what that's like, in a way that isn't new information for everybody.”

During the interview, Gero also spoke to guest stars (including Stargate Atlantis alum Jewel Staite), recreating Ziggy for the new series, and more. Watch the full interview below and be sure to tune into the premiere episode of Quantum Leap, tonight on NBC.