The CW’s new sci-fi adventure series, Tom Swift, premieres on Tuesday, May 31. The character was first introduced in season two of Nancy Drew in an episode meant to serve as a backdoor pilot. Like Nancy Drew, Tom Swift is based on classic YA characters from the early 20th century (the first Swift novel was published in 1910.), but this is not your grandmother’s teenage hero. As reimagined by CBS Studios, Tom is still a genius inventor and heir to his father’s business, but he also is unimaginably wealthy, black, and openly gay. Enormously charming, this hot young billionaire is the man who many would kill to be – or be with.

While the new series is a spinoff, it’s unlikely fans will see a crossover anytime soon. At a recent press day, star Tian Richards (Dumplin) told journalists that the two shows are not on the same timeline. “It's been three years since Tom Swift was in Horseshoe Bay. That takes place in 2019; we take place in current day. So, Tom has definitely grown up a little more. When we first meet him [in Nancy Drew], he's still trying to get the meteorite to build the spaceship for his father. At the top of our series, we meet him when he has just completed that spaceship.” 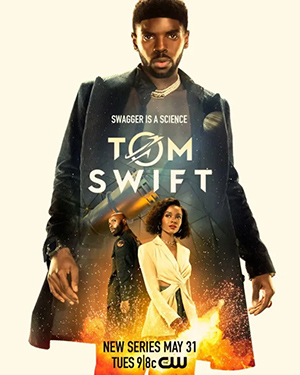 In the first episode, “…And the Liftoff to Saturn,” Tom’s father launches in the new ship, only to disappear in space. In his search for answers, Tom is thrust into a dangerous adventure full of conspiracies, unexplained phenomena, and a shadowy cabal hellbent on stopping him. SciFi Vision asked executive producers Melinda Hsu Taylor and Cameron Johnson what inspired the new series.

“We definitely wanted to make a show that was way more inclusive than the original [intellectual property],” Taylor explained. “The books from back in the day are from a different era. They don't hold up, really. However, what we loved about [it was] the core concept of optimism and friendship and relentless positivity. Then, we populated it with a black gay billionaire and all his found family and friends.”

Tom Swift is also making history. “There has, as far as I know,” said Johnson, “never been a network TV show where the titular character, the #1 on the call sheet, is a black gay man. I've never seen a show where those sorts of stories are explored and are the center of the story and are able to explore love and romance and fun without just being somebody's additional character. So, I think it is historic. I think it is messy, and I think it is really fun, and I think you're gonna love it.”

Be sure to check out the series on Tuesday on The CW.
Twitter
BotonSocial por: SocialEmpresa
Category: Interviews