Season one of The Wilds follows a group of teen girls who survive a plane crash on a deserted island, however it’s quickly revealed to the audience that it’s part of an experiment run by Gretchen Klein, played by Rachel Griffiths, who also running a control group of boys, wants to prove that women can create a society superior to men.

In the second season, the audience gets to see the male perspective on the island. On the female side, there were two girls that were plants who knew about the experiment, one of whom died on the first day. Perhaps as to counterbalance that, one of the boys, DJ (Elliott Giarola), appears to the boys to get killed by a shark, but it is a ruse. In reality, DJ is actually Gretchen’s son, Devon. 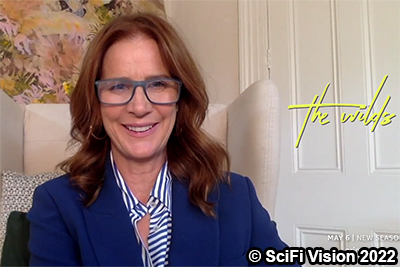 In a recent interview with SciFi Vision, Griffiths talked to Gretchen’s decision to put him on the island. “I think she's kind of giving him this kind of twisted opportunity to redeem himself in [her] eyes,” explained the actress. “He is, I guess, the Confederate that she feels that she could trust, because she has that leverage over him. Whereas last time, obviously, her Confederate went so bad with the girls that she didn't want to risk that again, but I think it's just this horrible position she's put him in.”

Devon makes a point of telling her how twisted she is for purposely hurting the teens in the ways she is. How does the character rationalize that to herself. “I think there are those people…they really believe they're doing things for the right reasons,” said Griffiths. “There is a certain person for whom the idea of something is greater than the value of an individual kind of humanity. You know, they love humanity, but they don't like people very much. It's that, and I think history is just littered with people who…are able to really compartmentalize the greater good, that the ends justifies the means. There’re plenty of people in all walks of life…It's ignoring the soul of the person for this greater good. It's the most dangerous aspect, I think, that humans are capable of doing that.”

For more, watch the full interview below and be sure to check out The Wilds now available to stream on Prime Video.