Recently, season two of Undone was released on Prime Video. The animated series, which comes from creators Kate Purdy and Raphael Bob-Waksberg, follows Alma (Rosa Salazar), who after a car accident finds herself with a unique connection to time.

Season one of Undone meant different things to different people and could be interpreted in different ways. Season two is no different. “I think everyone's gonna get something different from it,” Bob-Waksberg told SciFi Vision during a recent roundtable. “I mean, I would want people to go in, depending on where they are in their own journey, they're going to meet it at some point, and hopefully, they'll take something meaningful from it and continue along their journey.”

“There is no set message or one single takeaway that we want people to get,” he added. “I don't think it's a didactic show like that.” 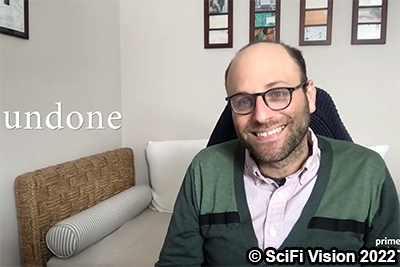 A big part of that with the show is obviously whether Alma can really travel through time or it’s all in her head. Purdy, who talked about drawing from mental health issues in her own family, talked about getting that representation right. “We never say that Alma is mentally ill; we say that she's having an experience, and it's specific to her,” Purdy told the site. “…I wanted to make sure that it felt specific to her and her character, and this sort of exploring the unseen world and how we kind of interpret mental health and different philosophies and ancient wisdoms and to sort of break open some molds and sort of say maybe all these things are kind of related, or maybe there's a larger picture that we don't understand and that we're only seeing aspects of it and we're making judgments or deciding that things are a certain way because of a certain thing. But actually, even in the mental health field, schizophrenia is an umbrella term, and there are so many aspects of it and experiences within it. There's so much we don't know or understand…We don't have all the answers, but [we’re] using that as a way to ask questions about what's happening to her, what she's going through, what could really be happening, and explor[ing] those possibilities.” 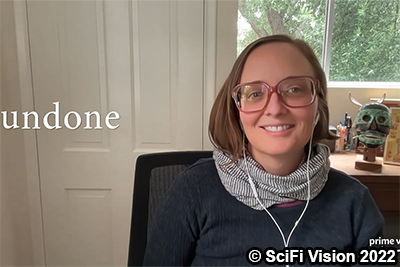 SciFi Vision also talked to the producers about the art in the series and how rotoscoping is used. None of the backgrounds actually exist in real life. “Every single background that you see is a hand painted oil painting that takes four to five days to paint,” pointed out Purdy. “One rotoscoper will spend an entire day on just two seconds of animation. It's incredibly labor intensive and hand crafted, hand painted, hand drawn. It's really quite incredible.”

Bob-Waksberg went on to talk at length about the actors filming in an empty studio as well as about the animators illustrating the actors themselves. “I think what is really brilliant about the animators, which you almost take for granted, is the way they illustrate those actors’ performances,” said the producer. “I think we're trained to assume that's a filter…but actually there’re a thousand decisions in every shot of like…what's the cleanest way to convey this emotion that this this actor is giving you, because if you literally draw every line on their face, it looks busy and complicated, but you need to do enough to sell what the actor is selling in a [minimalist] of ways. So, I think the biggest compliment that I have for animators is almost that you take it for granted, that they make it look easy and natural, but it's painstaking artistic work.”

For more about the animation techniques and more, watch our portion of the interview below, and catch Undone, now available to stream on Prime Video.