In last night’s all-new episode of Fear the Walking Dead, Daniel (Rubén Blades)’s mind continues to break down and he takes off on his own, thinking Ofelia is alive. Luciana (Danay Garcia), who has been helping him with his memory, and Wes (Colby Hollman) go after him, while the others go after the weapons cache. Things go from bad to worse when the three of them are captured by Arno (Spenser Granese), who uses Daniel’s mental state to his advantage, telling him that he has Ofelia and will take him to her, if he tells him where the weapons are. Daniel sends him to the wrong coordinates, but in the end tortures Arno and puts Luciana and Wes in danger trying to get back his daughter.

Recently, SciFi Vision talked to Blades, Garcia, and Hollman at a roundtable interview about how dangerous Daniel has become and if he still can be trusted and useful.

“I think what happens right now is that Daniel is traveling between the dark and the light,” Blades told SciFi Vision. “I mean, when he's in the light, he's very effective…I mean, Daniel got them there, but he got him out of there as well. So, that's the two sides of the coin that Luciana is considering in the end, the larger plan, the longer view. It’s like, he can help [them] actually, with Strand (Colman Domingo). If we lose him, Morgan (Lenny James) may not have the capacity to understand what Strand is going to be doing, and how Strand thinks, as Daniel does. So, he is dangerous, and in that state, when he's in the dark, he can get you killed, but when he's in the light, he can save you. So, it's like a roll of the dice at this point.” 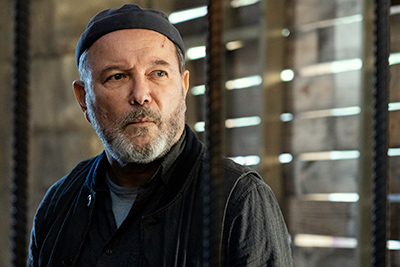 Garcia told the site that even Morgan told her at the beginning of the episode that they might need his help. “Everybody's kind of like having an intuition or a hint that Daniel is extremely important,” the actress told the site, “not just because he knows Strand, [but] because the way that he operates is different than our way to operate, to survive. We don't know the nuances of his past, but we know that he lived it and survived it before the apocalypse. I feel like, if out of all people, if somebody's really capable, it's Daniel…That's kind of what this episode is about is her realizing and from real experience of trusting this guy, the light and the dark, and earning that trust too. I want to earn that trust from him.”

According to Hollman, Wes sees it from a different point of view. “He has put our lives in danger a couple of times,” said the actor, “and that's to say the least. So, where does that trust end?...I guess Wes has just a little bit of a shorter [fuse] than they [do]. Even Wes knows that about himself, and he sees how much Luciana cares about it, but at the end of the day, we're trying to survive. It's about survival, and [Wes] thinks that he has a better way or idea of how to survive. He's going to trust that instinct, but he kind of has to go along with Luciana, because he doesn't want anything bad to happen to Luciana…[And] he does hold a lot of love for Daniel, but it's kind of like, you just have to weigh your pros and cons, because unfortunately, Daniel isn’t the man he used to be, in Wes’s eyes.” 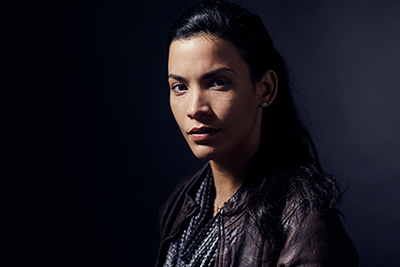 During the episode, when Arno tricks Daniel, Luciana begs him not to keep the lie going about Ofelia, but then she does the same, telling him Ofelia is alive in the tower with Strand, to get what she wants. How does she reconcile the difference? “The entire episode, my goal is to save Daniel,” Garcia told SciFi Vision. “Right away there's a miscommunication, but he already has a seed that was planted from that first scene with that card, the Abigail boat. So, what Luciana realizes from the beginning to the end is that whatever he puts in his mind, he achieves.”

Garcia went on to admit that as an actress, it took her awhile to justify it to herself. “This guy's like basically a machine and nothing can stop him. I realized that this is exactly what we need, because I feel like we have tried everybody's way, but we haven't really explored the capacity of Daniel…I discovered that Ophelia is our answer, and I decided to turn her back to life the same way he turned the boat back to life…I just played his game and [am] hoping that he could come along and understand later why I had to do what [I] did, because there's one thing I know for sure is Daniel is someone that likes strategies. He understand practical things.” 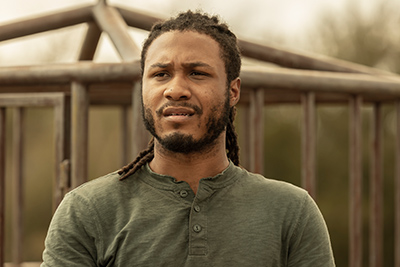 Would Daniel be able to forgive Luciana for the lie? Blades thinks so. “I think when Salazar can think straight,” Blades told the site, “[he] will understand why she did what she did, because it was the thing to do, given the circumstances. If Salazar can think straight, he will forgive her. Not even forgive her, he’ll understand why she did it and move on.”

The other thing that happens, is at the end of the episode, Wes goes to the tower and apparently joins Strand, which may be an even worse choice to make morally. “I don’t think Wes sees it like that,” Hollman told the site. “Right now, he’s surrounded by people that are lying to him and [there’s] the possibility…that's a lot worse. At least Strand shoots straight. If I'm dealing with Strand, he's going to tell me how it is, tell me how he's feeling. I know where he stands, and if I could work next to somebody like that, then I prefer that than somebody who’s going to lie to me, possibly stab me in the back. Who knows what in the world Daniel is going to do after he figures out Ofelia is not in that tower, and I don't want to mess with him.”