Video Interview: Aasif Mandvi Hosts Would I Lie To You, Premiering Tomorrow

Tomorrow night, The CW premieres its new game show, Would I Lie To You?, based on the British panel series of the same name. Actor and comedian Aasif Mandvi takes Rob Brydon’s role as host, with Matt Walsh and Sabrina Jalees taking on Lee Mack and David Mitchell’s roles as team captains. For each show, two celebrities join each captain to make up the two teams. Players take turns revealing outrageous and unusual facts, and the opposing team of panelists must decide if they are telling the truth or lying.

Mandvi, who recently took part in a roundtable to talk about hosting the new show, told SciFi Vision that he was “very familiar” with the original series. “I was addicted to the original series,” said Mandvi, “and that's why I wanted to do this one. My wife and I just ended up watching it. I think it was in 2019 we discovered it, maybe 2018. I found it on Britbox, and I just started watching it. They’ve got fourteen seasons of the British one, so there was just a lot of material there. So, we would watch it at night as a way to just decompress…We would just use it as a way to kind of just chill and laugh.” 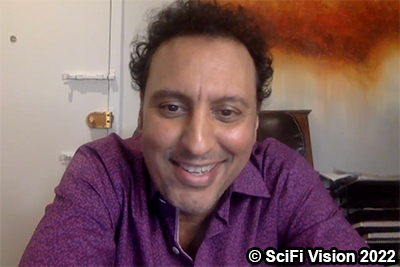 The actor said that he brought the idea to Robert King, who he works with on Evil. “I just said, ‘There’s this amazing show, and when I watch it, it’s a way for us to deal [with and] manage our stress and anxiety about the world…You should watch it.’ ”

“He did,” continued Mandvi, “and then he came back to me next time I saw him and said, ‘I love that show. I'm addicted to it. I watch it all the time. Why are we not doing an American one?’ And I was like, ‘Why not?’ And literally, that's where it started…I'm amazed that we did, because most of the time when those conversations happen, it never happens. So, the fact that it actually happened is kind of remarkable, but I'm so glad it did.”

One of the interesting things on the American series is that sometimes Mandvi himself gets to tell a story that is either the truth or a lie, which has not happened on the British version of the panel show for a very long time. Coming up with real stories rather than lies, Mandvi told SciFi Vision, is the challenge. “It's actually easy to come up with lies,” said the comedian, “because you can just come up with [stuff], but to find stuff that's true that could be a lie [is more difficult].”

“We decided that we were going to do this round where the last round was either one of the stories of the team captains or the host,” Mandvi explained. “So, we kind of flip it around; sometimes it's Sabrina, sometimes it’s Max, and then me.”

The comedian also talked to the site about how he would sit down to do interviews to talk about different parts of his life, and it would get him in the mode of thinking of stories. “Once you open up that part of your brain, you start to find you wake up in the middle of night with a story that you want to use on the show,” said Mandvi.

Mandvi also teased some of the celebrities who would be appearing during the season, who are not necessarily comedians, but rather “good storytellers,” naming a few examples over the course of the interview, including, Brooke Shields, Richard Kind, Chris Gethard, Jordan Klepper, John Hodgman, Isaac Mizrahi, and Preet Bharara.

Watch our part of the interview below, and find out whether Mandvi prefers Lee Mack or David Mitchell!