The highly-anticipated live-action series Halo comes to Parmount Plus on Thursday. The series is based on the hugely successful video game franchise of the same name. One of the iconic things about the games is Master Chief’s costume. During a recent roundtable interview, star Pablo Schreiber, who plays him, talked to SciFi Vision about how the costume informs the way he plays the character.

“The fact that it's hard to manipulate and makes you a little immobile informs what we're able to achieve,” said Schreiber. “Mostly it informs how we now have to attack shooting it. There are certain elements that are going to have to be via VFX because they're just not capable in the suit. One particular thing I'm thinking of is from the video games, I always love the moment where where chief is running into battle, and he reaches behind his back, pulls out the assault rifle, and continues into battle and start shooting at folks. That's something that, because I can't get my hand above my shoulder, just simply can't happen in real life…So, there are certain things that have to obviously be movie magic and be augmented by visual effects, and the suit does affect some of that.” 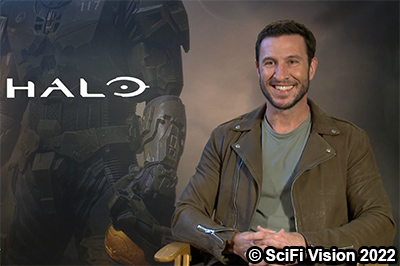 In the game series, the character never takes his helmet off and his face is never revealed, but now, with the series, fans will see what he might look like. “The armor is obviously the iconic parts of Chief that we all know from the video game. But let's be honest, the video game is a first person shooter video game where you're asked to play as the Chief himself, and that's why the character has been kept as kind of symbol and very vague, and there's not a lot of character development with him…[M]aking a television show is a very, very different medium, and when you make a television show, it's no longer a first person shooter video game.”

“You don't want to have to too much of a developed character [in the game],” the actor added, “or it will make people feel like they're not him. The process of of the first season is really the process of discovery for John, where he begins to have access to his emotional life and some personal memories that he didn't have access to before, and the question of who is the Master Chief is really spooled out over the course of the first season.”

For more, be sure to watch our interview below and check out Halo tomorrow on Paramount Plus.