On tonight’s episode of The Walking Dead, Eugene (Josh McDermitt) finally got his moment of happiness and was all in with his relationship with Stephanie (Chelle Ramos), even telling her he loved her, but everything fell apart when she disappeared. After spending all his energy looking for her, a bombshell was dropped with the reveal and Eugene’s realization that not only was Stephanie not really missing, but she was an imposter pretending to be the woman he talked to on the radio in order to get information on his community. A second shocker came when Max (Margot Bingham) told him that she was actually the one he talked to.

Last week, McDermitt talked to Jamie Ruby of SciFi Vision in an exclusive interview about the episode and what’s to come on the series.

According to McDermitt, Eugene had blinders on. “He was in love and was able to overlook things,” said the actor, adding that the decoy Stephanie did a great job at fooling him. “He just didn't see it. He got comfortable, and I think we've seen that it's very dangerous to be in this world and let your guard down, and he certainly did. I guess we're going to see coming up how catastrophic that decision was.”

Can it still work with the real Stephanie he talked to on the radio? At least for now, Eugene will be cautious. “I think he's going to close his borders and try and keep everyone out as he figures out what's next for his life,” said McDermitt, adding that Eugene is also embarrassed as well as thinking about the others in the group who are currently at the Commonwealth. “I think he's definitely concerned for the safety of his friends and the people that he loves, and that's probably his number one goal right now, to make sure that no one else is caught up in some sort of web like he was.”

For more on McDermitt’s thoughts on Eugene and Stephanie and more, read the full transcript below, and be sure to watch new episodes of The Walking Dead every Sunday on AMC and AMC+.

SCIFI VISION:  Do you think there was a part of Eugene that suspected something was going on with Stephanie before she left, or was he just ignoring the signs? 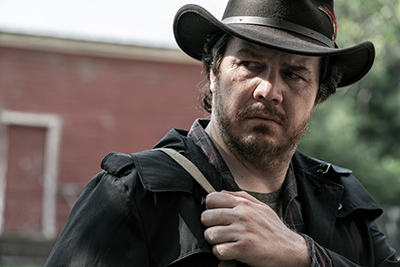 JOSH McDERMITT:   I had several conversations with the writers, because my concern was, obviously, this is not the same voice that he had spent so much time talking to on the radio. There may be a couple things here and there that are a little off or a little different from maybe some information that was shared on the radio, but, I think, at the end of the day, what we were talking about a lot was that he was kind of caught up [in it], like almost having blinders on, because he was in love and was able to overlook things. It wasn't that he actually stopped and [looked] and went, “I’m just gonna let that go.” It was just, he just didn't see it. He got comfortable, and I think we've seen that it's very dangerous to be in this world and let your guard down, and he certainly did. I guess we're going to see coming up how catastrophic that decision was.

Are you saying was the love for the decoy Stephanie that he was physically with?

Yeah. Do you think part of it was also for her, or was it all just originally for who he met before that on the radio?

It's really, actually a great question. I think he was falling in love with her on the radio. Then, being with her in person, it's different. It just would be different. So, I think that love continued, but he already had a head start in a sense. Really, all decoy Stephanie had to do is not fumble the ball, in a sense. He was going to fall in love with her regardless. I think that the decoy Stephanie did a great job at at fooling him. So, yeah, he was definitely in love with her, but he certainly had a head start based on the conversations that he had. It was a little mixture of both.

And I just want to shout out Chelle Ramos, who did an incredible job as the decoy Stephanie. I mean, she’s a really fun actor to work with, and she did a great job.

I think maybe they shouldn't have put the real Stephanie's name in the [credits] originally though, because I know a lot of people on the internet were like, “They changed the actress!” when she showed up, so fans kind of wondered what was going on.

Well, I don’t work in post-production.

But I’ll let them know. [laughs]

But obviously, Eugene's hurt…but, I mean, is it something that they can kind of move past and be together? I mean, I assume that basis is still there for that relationship, even after what happened, especially because it's not really her fault, either. So, I mean, can he open his heart to her? 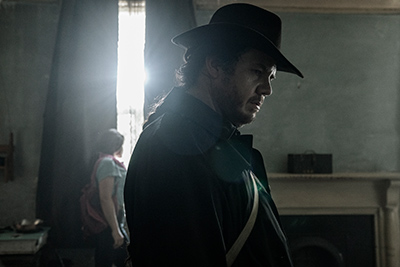 Yeah, I mean, I think it's certainly one of those things that he doesn't know this woman…This is literally in the aftermath, the moments after everything being revealed to him. She's like, “Oh, hey, I was the person who you were on the radio with.” And he was like, “Yeah, right.” I think that he's not trusting of anyone. I think he's going to close his borders and try and keep everyone out as he figures out what's next for his life. I'm not sure he's even thinking, “Okay, well, if this is the person that I that I was talking with, how can I do that?” I think it's just one of those things where he's trying to figure out who, what, when, where, and why, and it could come at every angle with all of those questions of like, “Am I staying in the Commonwealth? Is this the right place for me?” Does he have tremendous guilt that he brought a bunch of his friends here? Does he not? He's seeing how great everything is for everyone else, but all of a sudden, things are not great for him. So, there're certainly a lot of questions on the horizon, but he's sitting in the middle of Ground Zero, looking around at a destroyed life here.

Right, and this is kind of expanding on that, but I was going to say, Hornsby (Josh Hamilton) makes a point of saying that regardless of what he did, their lives are better. And obviously, he didn't do it for the right reasons, and I don’t think he’s a good guy, but he's not wrong. I mean, how does Eugene kind of reconcile that, and will he maybe keep quiet for the other people’s sake? Or is he maybe just too embarrassed to talk about it? I'm just kind of curious…Can you kind of talk a little bit about that?

I mean, yeah, that's the struggle. You're so spot on to say that Hornsby is not wrong with what he says, but the fact that this happened, yeah, I think he's embarrassed, because he fell asleep while he was on watch, in a sense, and does he want to admit that? Does he want to pull everyone away from eating ice cream and having, you know, brunch, and all this amazing stuff? And Ezekiel (Khary Payton), they're trying to get him on the list to get surgery and all this stuff, right? All this great stuff. Does he want to be like, “Hey, guys, I was fooled. We need to go.” Yeah, that's the struggle. At the same time, it's like, I think he's embarrassed and humiliated by it. So, just then, “How do I move forward from this?” is kind of within the forefront of his mind. “What's next for me,” is what he's thinking about, for sure.

Right. Let me ask you, as you were talking, I was thinking back to something Lauren Ridloff said when we talked before [during the roundtable] about how their main goal isn't necessarily happiness anymore. What do you think to Eugene is the most important to him right now? I mean, is it his friends? Is it just so he doesn't have to [keep fighting]? I don't know, just what is he kind of thinking about? Or does he just have so many things on his plate right now that he doesn't know what to think?

Well, I mean, in this moment, in the aftermath, yeah. I don't think he knows what to think, but I think overall, before that, yeah. I think that's a really interesting observation that Lauren had, but I think he's certainly thinking, “Oh, maybe I can think about happiness. Maybe I can make that a goal. Maybe I can think about what my life is going to be and how similar it could have been [to what it] would have been pre apocalypse…I think that definitely he was at that point of like, “Oh, maybe this is something I can think, bigger picture,” but now that that's just blown up, I mean, I think he's definitely concerned for the safety of his friends and the people that he loves, and that's probably his number one goal right now, to make sure that no one else is caught up in some sort of web like he was. 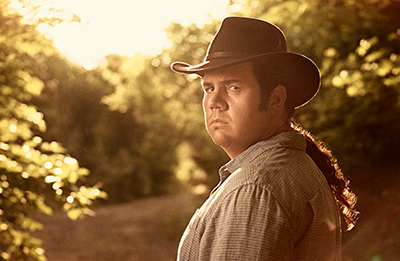 I posted on social media, seeing if people would send me some fan questions, and one thing that came up a lot is, although it's not been obviously confirmed or anything in the series, a lot of people feel that Eugene may be on the spectrum. Was Eugene at all influenced in that way or has that ever come up at all in discussion on the character in that sense? What was your inspiration, I guess? I know I read it was your brother, partially, but where else have you kind of gotten it from?

Well, with my brother, it was just his voice that I used, because my brother's just kind of monotone when he speaks. So, that was the only inspiration I pulled from my brother. But yeah, that's interesting. I've talked to a lot of fans about that, and I've heard that before. I find that really interesting. You know, he, in a sense, has become a hero for some people, I think, and it's really cool.

All right. Well, thank you so much. I appreciate your time. I'm looking forward to seeing the rest of the season. I know it's broken up again. So, we're going to have a while after a bit.

Yeah. I don't even know when the next episodes air after these do, but patiently waiting.
Twitter
BotonSocial por: SocialEmpresa
Category: Interviews