Stars and Producers of Ghosts Tease Back Half of the Season

In a recent episode of Ghosts, “Possession,” Hetty (Rebecca Wisocky), enters the body of Jay (Utkarsh Ambudar), possessing him, which meant that Ambudkar had to emulate the character, which he pulled off brilliantly. “Rebecca laid all of the groundwork for me to just sort of fill her shoes as best I could,” Ambudkar told SciFi Vision during the Winter TCA panel, saying that Wisocky provided him all the source material he needed. The actor added that they did have a few notes back and forth, but he still wanted to do his “own version” of Hetty.

Wisocky told the site that she was “blown away” by Ambudkar’s emulation of her. “He really channeled an essence of this character that I at some moments wasn't even aware I was bringing to the table,” said Wisocky, adding that fans online responded positively.

During the panel the cast also treated everyone to a sneak peek of the upcoming episode “Therapy” via a table read of a few scenes. 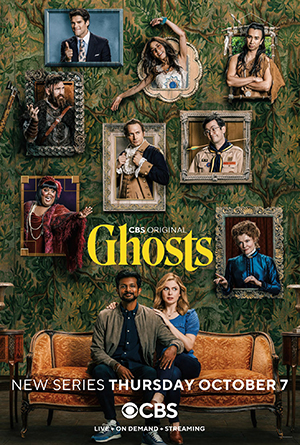 There were also some tidbits teased during the panel including some of the upcoming guest stars. “We've got some big comedy guest stars that are just people that Joe [Wiseman] and I have really wanted to work with for a long time,” said executive producer Joe Port. Some of those guests will include Matt Walsh, Betsy Sodary, Rob Huebel, and Mark Linn-Baker.

Story-wise, the producers also teased a bit about what was in store in the upcoming episodes. Port said that fans would be getting more of the ghosts’ back stories, and that Sam and Jay would eventually open their B&B at the end of season one. Wiseman also teased that going forward fans would also get all of the ghosts rather than having the characters featured split between episodes.

Star Rose McIver also teased that in the back half we get to meet someone from Jay’s family. “It's really awesome when we get to see more of where he's from, and Sam gets to be the outsider a little, in some ways,” said the actress.

Be sure to tune into Ghosts Thursdays on CBS.
Twitter
BotonSocial por: SocialEmpresa
Category: Interviews

Exclusive: For All Mankind's Wrenn Schmidt on What's Next for Margo
Wednesday, 15 June 2022