Tonight, A Discovery of Witches, which is based on the All Souls trilogy by Deborah Harkness, returns to AMC for season two. In the second season of the series, which is also available to binge on AMC’s premium streaming services, Diana, played by Teresa Palmer, and Matthew (Matthew Goode) have safely arrived back in time in Elizabethan London where they must continue their search for theBook of Life as well as find someone to teach Diana to control her magic.

Recently, to promote the series, Palmer talked to Jamie Ruby of SciFi Vision in an exclusive interview where she talked about her work on the series, including the difficulties in working in elaborate Elizabethan costumes, working on such a detailed set, what she was looking forward to filming in season three, and more.

SCIFI VISION:   When you first started working on the show, were you worried about bringing the character to life knowing that there were already fans of the book and worrying about what they might think? 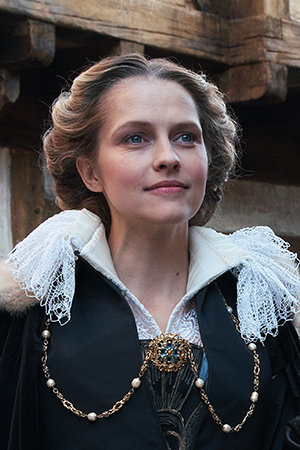 TERESA PALMER:   Yeah, I definitely felt that there was a sense of responsibility on my shoulders, to bring her to life in a way that resonates with the many fans of the book series, but I also tried to liberate myself from the pressure of being exactly the way she is in the book. I wanted to forge my own Diana and have her sit organically within the essence of who I am and allow myself to bring other things to the role. I think I just also felt very held and embraced by Deborah Harkness. She was always around, and I was able to lean on her. She would give me all sorts of wonderful pieces of information and backstory, and it helped me forge my own sort of idea of who Diana is. Then, luckily, it was embraced by the audience and the fans of the book.

Had you read the book before you got the role?

No, I wasn't familiar with the trilogy, actually. I just had my second child, and books were not something that I [laughs] had much time for. So, I kind of missed out on reading the books. Then, when I got the role, I immediately dove into all of them.

Also, knowing that it's an adaption, sometimes you have to kill your darlings. So, [there were] certain aspects of the book that I would [fall] in love with, and then I would read the scripts, and those moments couldn't be included in the scripts, because we were trying to condense the book down to eight episodes, or however many episodes each season is, ranging from seven to ten episodes. So, I tried to free myself from the books in a certain way, but then I would use it as a bible. I would go back, take the book, get some context for a scene, and then really lean into the writing that was in front of me in the script.

What was one scene that wasn't included or was really changed that you wish had kind of stayed the way it was or had been included?

Most things were included that I loved. There was in the first season a whole sequence where Diane is a passionate Yogi. She's into yoga, and my own personal experience with yoga, it really helped cultivate a spiritual foundation for me, and I was trying to figure out ways in which I could fold that into Diana without that whole sort of storyline [that] got cut out.

There are other things that got brought earlier, and then, there are very pivotal moments in the book which got moved to another season, or they came a lot earlier, and it would just be about pivoting. You just pivot, and that's why it was so important to not be too tied down to everything that we were reading in the books.

And, luckily, Deb Harkness was so hands on with the script that she could sort of unpack the changes for us so that we knew where we were at emotionally. To have her as an executive producer was just invaluable, because she could make sense of any of the changes, and it wouldn't throw us too much.

Yeah, I’m sure that made it be a more faithful recreation too. A lot of times when the authors get left out, the show doesn't work as well. 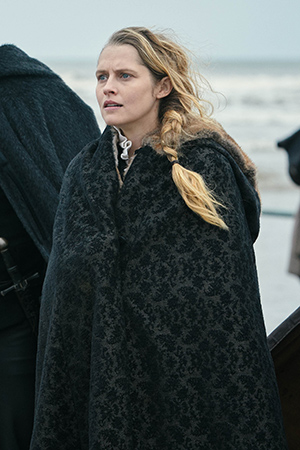 So, season two is beautiful in every sense. Can you talk a bit about working with such elaborate costumes, and do you have a favorite?

Yeah, I mean, I have to say my favorite is my wedding outfit. I love it. I think it's just absolutely spectacular. I know how hard the costume girls worked on that one in particular. I mean, every bead was threaded, every tiny little thing that you see, the attention to detail on our dress. [It] was handmade. These girls would stay out for hours and hours, sometimes a twenty-four hour period, just getting things done, or if something fell apart, they would just be around the clock ready to make sure that the outfit was perfect for Diana, and that wedding gown in particular. It was really challenging for them. I just thought it was such a vision and the most remarkable piece of artwork I've seen in a costume since I started my career. That and the neck piece, the head piece, was just so gorgeous.

It was quite funny to wear, actually, because I have a lot of hair, and then, on top of my already thick head of hair, they would put woven pieces. So, I always had a really thick woven piece at the back of my hair, and it would rub up against the headpiece, and it would just kind of pitch my head forward slightly. [laughs] I'd have to keep my head forward some of the time.

Even just wearing the costumes, they do transport you to another time, which was amazing and, I think, very liberating as a performer to be given the gift of wearing a corset and wearing dresses like that, because it just makes it so much easier to embody a character who's walking around in Elizabethan London. That costume was my favorite, but they were all incredible.

And they worked with me, because my little girl was only three months old when I started season two, and so the corsets had to all be done up at the front rather than the back. There were these kind of hook and eyes as opposed to the tying, because I was breastfeeding, so I quickly had to pop it off. There would be like six girls helping me get these gowns off while my baby's crying for milk. So, it was it was quite funny; that would happen a number of times a day. [laughs]

[laughs] Easier than being back then, though, at least. You have people on the set to help you.

And the sets, I mean, they kind of recreated Elizabethan London, which is crazy. What's it like just kind of stepping into that and being in another world like that? There's so much attention to detail. Do you have a favorite part of that you can think of off the top of your head? 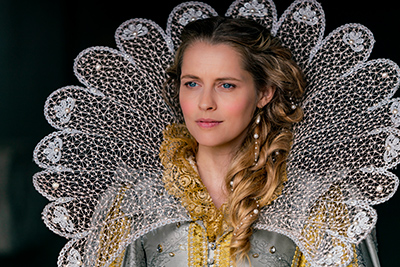 Yeah, We shot with James North, who is our production designer. He built the Elizabethan streets on this farm in Plas Machen in Wales, and it was really muddy around the area. We’d get out of the car, and I remember the first time I stepped foot onto the cobblestone streets, I just was overwhelmed with emotion. I could not believe it, and to see it bustling with people and extras who just looked completely of the time, I always think about like, background players, because I started off as a background by myself, and the amount of energy and love and passion and performance that they're putting in, it just elevates the whole experience.

So, I'm looking around, and I'm walking on these cobblestones, and I'm seeing the dried fruits and the little nooks and crannies and the shops that have been included that might not ever make it on camera. James North talked about the fact that, even if it was never going to be seen by the camera, he wanted the actors to be transported the moment we walked on that street, and that is how it felt. It was such a joint effort between the production designer, our directors and producers, but then also people like the extras showing up and being so amazing and committed to playing those pivotal roles. They are really important roles. It makes up the fabric of that time.

So, that just had a profound impact on me, and I remember at the end of each day, I'd always try and go around and say "thank you to" everyone, and they gave so much of their heart and their time. I was just really proud of everyone involved. It was such a great joint effort.

Is there a scene in season three that you were most looking forward to filming?

Yeah, in season three, there's a really profound birth sequence, and it's transformative for Diana. And to see Matthew in that experience again - he had been a father previously - it was emotional and beautiful and deeply impactful for these characters in this family. And to birth the young blood and these new, beautiful people who are going to make such an impact on this family, like that, for me, I think also, because I'm a mother, and I have a lot of children myself, that was my favorite part of it. And she doesn't use her power in birth. She's just like any other birthing mother, and she goes through it, and she's in the trenches. That sort of evolution, for me, I loved seeing her in that kind of vulnerability.
Twitter
BotonSocial por: SocialEmpresa
Category: Interviews