Exclusive: Nikole Beckwith Talks Together Together, In Theaters Today

Today, the film Together Together, starring Ed Helms and Patti Harrison, comes to theaters nationwide with a digital release May 11th. The movie, which was written and directed by Nikole Beckwith, follows Matt (Helms), a single man in his 40s, who chooses the much younger Anna (Harrison) to be his surrogate. The two develop an unexpected friendship as they face the ups and downs of surrogacy.

Beckwith recently talked to SciFi Vision in an exclusive interview about the film, including where the idea came from, working with Helms and Harrison, and more.

**Be warned there are some spoilers in the following interview** 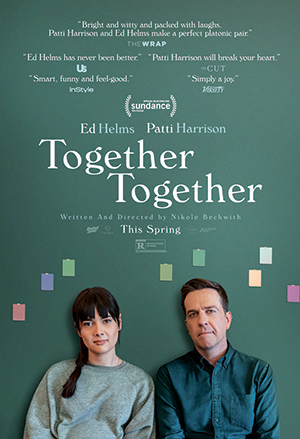 SCIFI VISION:  Can you first tell me, where did the idea for it come from?

NIKOLE BECKWITH:   Just curiosity, just curious what it might be like for two strangers to endeavor on something so intimate and emotionally charged.

Did you know someone who went through surrogacy?

No, I mean, I was a playwright before I was a filmmaker, and the first play I ever wrote was about a nine-year-old child showing up on the doorstep of the woman who had donated her egg. Then, hilarity ensues. I had also written a play with a surrogate that was kind of absurdist and about a mother and her five daughters, and I wanted to explore that relationship in a more grounded real-world way.

I did interview a surrogate before I started writing it and looked into what the process was and what each state's laws were and then went into writing the story armed with that information.

I was going to ask, you started to talk a little bit about it, but is there any more research you did to find out more about specifics, or was it just talking to people?

Just talking to those people. I try to keep a healthy distance between me and research, just to make sure that I'm not reappropriating anybody's actual experience or actual feelings into my fiction. So, I like to keep healthy boundaries with that. The surrogate I talked to was married and had her own children and also was working for an out of state family. So, I was really just trying to get the down-low on what those doctor's appointments are like, what the food logging is like, things like that. So, that's what I did.

Is there a specific reason you focused on the father? I thought was an interesting choice, because, usually, most films would be focused on the mother.

So, what made you choose to focus on a platonic relationship?

I think that there are so many different kinds of love. Again, culturally, we seem to be quite obsessed with romantic love, and I think that's one of the most narrow areas of that spectrum. For me, some of the most formative loves in my life have been platonic loves, and I have a real hunger for that. When I got into the story, I realized what a deficit of that kind of representation we have and that I was eager to see that and to turn the older man-younger woman dynamic on its head. I think that we are so used to seeing that. I read in an interview Maggie Gyllenhaal was at thirty seven too old to play the love interest of a man who was almost 60, and I think that's terrible. It's not that I don't think that that dynamic, that those people, don't have something to offer each other, an older man and younger woman, but it doesn't need to be sexualized and objectified and physicalized. I think that that is bad and also continues to perpetuate this idea that the most important thing women bring to the table is something as trivial and transient as their looks and their youth. I think that that's something that we really put on women, and I think that's terrible.

Yeah, I agree. And it was such a great friendship.

Can you talk about casting Ed and Patti?

Yeah, I have a long relationship with Ed and his work, obviously, as, I think, all people of my generation do. One of the things that I've always really loved about watching Ed work is that even when he's doing something utterly hilarious, there's the core of like, vulnerable raw humanity that is driving that character, and that's such a hard thing to maintain. It's a real gift. I really was excited at the idea of being able to put that core in the front seat and let the other things take a backseat, and he did it so beautifully. I just wanted to clear this space for that part of his gift, his many gifts, to show [themselves].

And Patti, just from the second I saw Patti, I was like, “There's Anna; there she is.” She has this real magnetism to her; you want to be around her; you want to know her and watch her. It's that movie star quality or whatever, but she also has a little bit of like a saltiness that's like, “Not so fast,” and that was a very important duality, I think, for Anna to have. It's not something that you can kind of direct out of someone. It's either in their toolkit, or it's not. I immediately recognized that in Patti and just was very excited [about] the idea of making something with her so different from everything that she'd done before, and endeavoring on this new tone, new genre with her.

What was the biggest challenge?

Time. I mean, when you're making an independent film, it's always time and money, right? So, we shot the bulk of the film in seventeen days. I think we all take great pride in how surprising that is for people to hear. But, yeah, I mean, I think when you're dealing with a big Hollywood movie, you’re shooting like half a page a day, and we were shooting like five, six, seven, ten, eleven pages a day.

Do you have a favorite scene? 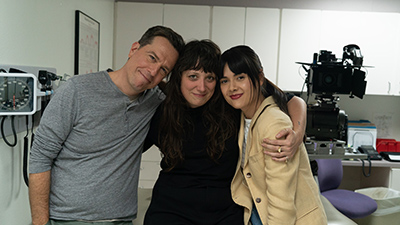 Oh, gosh, well the last scene, the final scene and string of scenes, like I always cry, which is saying a lot, because I've seen it [laughs] hundreds of times while editing and coloring and doing sound, and still it evokes a big emotional response for me. I also I really love the tampon scene. That was a really fun scene to shoot and a scene I also really loved writing. And the birthing scene, the birthing class, was also like very fun to shoot; we laughed a lot that day. The paint chip scene is such a nice pivotal scene for their characters, and that was really fun to shoot. I mean, yeah, I don't know; I love them all. The coffee shop with Julio [Torres] was so fun. The therapist, Tig [Notaro]; I mean, all of the ultrasound stuff with Sufe [Bradshaw]. The cast is just an embarrassment of riches. I think every single day there was more than one scene that we were all looking forward to seeing come alive.

There’s another thing I did want to ask. Anna at one point is worried about what will happen after it’s over, after she’s had the baby, you know, she's become such good friends with him, and it sort of worries her. What I want to know, is why did you choose to end it right after the birth, because it definitely left me wondering, are they gonna stay friends? Is she gonna get to see the baby? I mean, I guess that's kind of the point, but -

I always knew when I was writing the story I wanted to tell the story from the moment they meet in the interview until the baby's first breath, because those are the parameters of their very finite relationship. I think that part of that scene, where what I call the “I Love You” scene is, they have to admit to and talk about that elephant in the room. Then, once it's out there, and they realize that they're having a shared experience in that way, they can accept the parameters and limitations of their relationship and then live together within them. So, it's yet another area where they are seen and understood by each other.

And I think we also have a cultural obsession with the idea of forever, meaning success or meaning happily ever after, and I think that that's also very unhealthy. I think impermanence is a real part of our lives, and just because a relationship doesn't go on off into the sunset for the rest of your life, it doesn't make it a failed relationship or a missed opportunity. I think some of my most formative relationships and the loves that I've experienced in my life have been impermanent. It doesn't make it less formative or important. And I think even if Matt and Anna never sit in the same room together ever again, they are forever a part of each other's lives from that moment onward, because without the other, they wouldn't have reached this vital next chapter of where they wanted to be.

Lastly, I wanted to ask, do you have any other projects coming up that you want to talk about?

I have some some TV stuff in the works, but I don't know how much I can say out loud, but just some TV stuff.
Twitter
BotonSocial por: SocialEmpresa
Category: Interviews

Exclusive: The Walking Dead World Beyond’s Jelani Alladin on How This Character’s Death “Shakes Will to his Core”
Sunday, 21 November 2021

Doctor Who: The Edge of Reality is a Fun & Creepy Treat for Fans
Wednesday, 20 October 2021
More Articles...