Published: Thursday, 17 June 2021 23:45 | Written by Jamie Ruby
Tonight, as part of the ATX Television Festival, Shudder presented the panel “Horror Anthologies,” exploring modern series and why they are accepted by todays’ viewers. Panelists included Greg Nicotero, the showrunner/writer/executive producer/director of Creepshow, which will be going into its third season soon, Chloe Okuno, director of V/H/S 94, Tananarive Due and Steven Barnes, writers of Horror Noir, and Adam MacDonald, director of Slasher: Flesh & Blood. The panel was moderated by Damian Holbrook.

Panelists compared their influences in the horror genre and some of their favorites as well as why horror works so well in anthology format. Nicotero also gave his view on the reinvigorated genre of zombies. 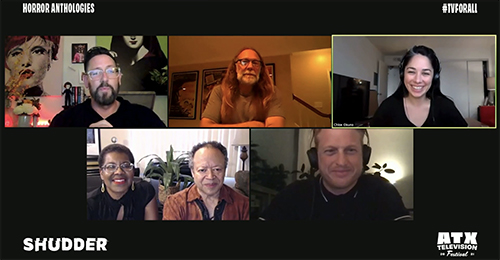 Okuno talked about her upcoming project V/H/S 94 and how it uses video tapes for inspiration. The show contains segments, each of which is a unique expression of each filmmaker.

Due and Barnes discussed how the segments/stories in Horror Noir will be different, yet similar in tone. They also talked about black tropes in horror and wanting to change things. Nicotero examined how Romero made a statement with his casting of African American actors without realizing it. People watch horror to be scared but they can use it for more than that.

MacDonald previewed the upcoming season of Slasher and how it focuses on a wealthy family and competition, as well as how they changed the aesthetic this season.

Nicotero discussed squeezing two stories into one episode of Creepshow and the quick seven day turnaround per episode. He also talked about the episodes that resonated with him and being able to infuse comedy in the series.

The group also discussed the idea of sharing stories by sitting around the campfire and telling tales and how anthologies can be a similar idea as well as why horror on television is something viewers connect with now.
Twitter
BotonSocial por: SocialEmpresa
Category: Event News