SciFi Vision | All Reviews | Television Reviews | Advance Review: Westworld Returns with All New Surprises & Thrills That Will Keep You Guessing

Advance Review: Westworld Returns with All New Surprises & Thrills That Will Keep You Guessing

Tomorrow an all-new season of Westworld premieres on HBO. Season three of the series really changed the format, moving outside the park and focusing on the control of humans more so than the hosts and their freedom. Season four continues the narrative with Charlotte Hale (Tessa Thompson), a version of Dolores, who, as Maeve points out, turns out to be worse than Wyatt, and she is hellbent on revenge on humans. The host of William (Ed Harris) is also thrown into the mix, influencing the powerful and leaving bodies in his wake.

When we pick up with the story after a seven-year time jump, Dolores (Evan Rachel Wood) is not Dolores, but rather Christina, lost living her life day after day, writing storylines for non-playing game characters (oh the irony), unsatisfied with what’s missing in her life.

Caleb (Aaron Paul)’s life has also changed, married with a child, but still living with paranoia, which serves him well when his family is threatened. He teams up with Maeve (Thandiwe Newton) who’s been living as a recluse in peace until it all comes crashing down. 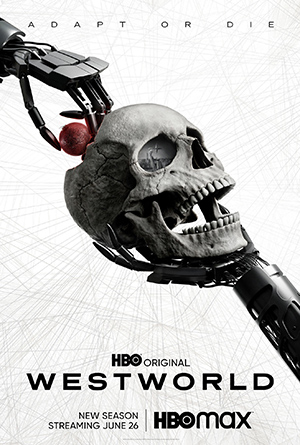 Meanwhile, Bernard (Jeffrey Wright) finally awakens at an untold point in time and finds his true purpose that he and Stubbs (Luke Hemsworth) will try to fulfill.

While season three lacked a lot of the mysteries and puzzles of the first two, season four brings back more of the complex narratives that were missing, twists, turns, and reveals abound, centering on what it means to be human and what freedom and free will really looks like. The first two episodes may leave you scratching your head and are a bit exposition-heavy, but once it gets moving, it doesn’t stop.

I loved how there were so many throwbacks this season as well to try to spot, such as Dolores waking up day after day reminiscent of her old life living in the park, and her roommate Maya (Ariana DeBose) asking her whether she wants black or white shoes, alluding back to the choice of hats when entering the park.

One of the things that seemed lacking to me about season three was that it took place all outside of the park. That is also something that was tackled in an interesting way this season as there is an all-new park, with similarities that fans will love. The story also has more of a focus once again on the hosts’ issues, bringing the story back around.

The sets and special effects are unsurprisingly fantastical, and the acting as always is terrific. Most of the important key players are back, rounded out with some great guest stars as new additions, such as Aurora Perrineau (Prodigal Son), Daniel Wu (Into the Badlands), and Aaron Stanford (12 Monkeys), to name just a few.

All-in-all, the first four episodes of season four given to the press to view in my opinion are everything season three wasn’t and more. Fans will really enjoy all the thrills surprises and spend the season questioning everything in the best way possible. Be sure to check out the all-new season starting tomorrow night on HBO and HBO Max.
Twitter
BotonSocial por: SocialEmpresa
Category: TV Reviews & Recaps