When we last left the Doctor (Jodie Whittaker) and company, Swarm (Sam Spruell) had replaced the faulty Mouri with Yaz (Mandip Gill) and Vinder (Jacob Anderson) to fix the time stream, but as humans they wouldn’t have survived time flowing through them. The Doctor, thinking fast, replaces another Mouri with herself, so she can absorb most of the time stream. She can’t contain it all, but she is at least, for the most part, able to hide Yaz and Vinder (and Dan [John Bishop]) within their own time streams. However, as the universe keeps shifting around them, they keep moving and some of their memories become corrupted. The Doctor must not only fix time and save her friends but try to attain her missing memories and figure out who created the Flux.

Tonight’s episode of Doctor Who, “Once, Upon Time,” had a lot of action and it never slowed down, however, it was to the detriment of the story. Like the premiere episode, so many different things were shoved into it that a lot of the episode did not make a lot of sense, and I still can’t break it all apart without a rewatch. 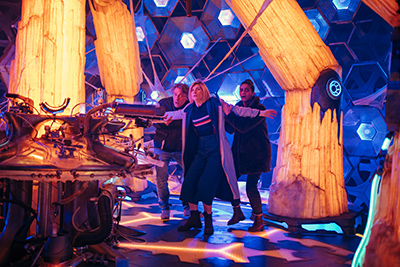 The overall story of the Doctor entering the time storm and the characters being thrown into their pasts did flow okay for the most part, but it already had a lot going on. It was a useful way for us to not only get some chunks of the Doctor’s missing memories but learn more about Vinder. I also welcomed Bel (Thaddea Graham)’s story and the separated lovers trying to get back together, but then, on top of that, all the confusing information about the Passenger was piled on, along with fragments of the Doctor’s past that weren’t explained, and don’t forget the Weeping Angels, the Daleks, and the Cybermen, as well as Swarm and Azure (Rochenda Sandall) and the blue cloud of temporal destruction that they somehow had a hand in creating. The story would have been much better if they had taken more time on the main story and explained things. I understand that not everything, especially the meaning behind the Doctor’s memories, can be revealed right away, but we could have used more character moments. We got more backstory on Vinder and Bel, the latter of who we have never even seen before, when we still don’t know much about Dan and Yaz, as usual, is being underutilized. 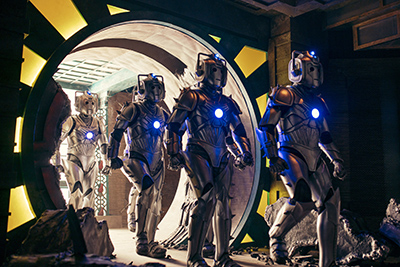 That being said, it was an exciting episode, and the acting was brilliant as always. The dynamics between especially the Doctor and Yaz are starting to shift as the Doctor keeps more and more to herself, and I like seeing Yaz calling her out on it and trying to break through to her. These kinds of scenes in the episode, however, were few and far between. Dan really didn’t have a lot to do this time either, for that matter.

Also, I don’t mind Swarm and Azure as villains, but I feel the story should focus on less at once, and things would hold more weight. I feel like the episode was bouncing around so much you couldn’t even really appreciate a lot of what was going on. I also am pleased that they are bringing in old villains (and Jo Martin as the Doctor), but it seems like fan service with the way it’s all stacked on top of each other. Those in Bel's story fit a bit better, but the Weeping angels feel like an afterthought.

I find the idea of a season long arc appealing, but I’m starting to feel like this was a ten-episode season that they had to fit into six episodes. A quickly moving story is good, but not when you don’t get a change to breathe and take anything in before it moves on to something new.

Overall, it wasn’t a bad episode, and it did have a lot of enjoyable moments, it just honestly felt at times like the writers picked tons of story points and stuck them in a blender to see what happened. I am looking forward to seeing more, I just hope the story starts to become more cohesive as the season continues.
Twitter
BotonSocial por: SocialEmpresa
Category: TV Reviews & Recaps