Netflix's Shadow and Bone is a Delightful New Fantasy Series

Today the fantasy adventure series Shadow and Bone premiered on Netflix. The series, which is based on Leigh Bardugo’s young adult novel trilogy, takes place in the war-torn world of Ravka and follows Alina Starkov (Jessie Mei Li), a female mapmaker and soldier of the First Army, who is ostracized because of her Shu heritage. Back again with her best friend from the orphanage, Malyen “Mal” Oretsev (Archie Renaux), she is devastated when, as a tracker in the army, he is chosen to join a group of soldiers on a skiff across the Fold where her parents were killed. The Fold is an area of permanent darkness that separates East and West Ravka and is filled with killer flying creatures known as Volcra. Crossing it almost certainly means death. Unwilling to be separated, Alina burns the maps for the journey so the soldiers crossing require a cartographer and bring her along.

Things go horribly wrong when the skiff is attacked by the Volcra in the Fold. Many are killed; however, when the winged creature grabs and injures Mal, Alina gives off a great light that destroys it, and she and those left are spared.

When the general of the Second Army, Aleksander Kirigan (Ben Barnes), demands to see Alina, it is revealed that she is a Grisha, or can manipulate matter. She is a Sun Summoner and has the ability to create light, which could potentially destroy the Fold and reunite the country. 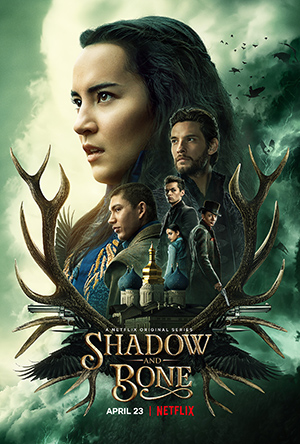 Alina joins the Second Army under Kirigan and starts her training at the Little Palace as a Grisha to learn to control her powers, forced to leave Mal behind.

Meanwhile, in West Grisha, a band of thieves called the Crows, including Kaz Brekker (Freddy Carter), the leader, along with member Ineja Ghafa (Anita Suman) and sharp shooter Jesper Fahey (Kit Young), learn that Dreesen (Sean Gilder) is paying one million kruge for anyone who can cross the Fold.

While tensions grow between East and West Ravka, Alina must not only learn to control her powers but must also separate friends from enemies, as nothing is as it seems.

If you are new to the Grishaverse, as I was, there is a lot to take in. I found myself confused a bit at times trying to keep everything straight. There is a lot of moving parts and a lot of vocabulary, which made it feel a bit slow in the beginning. I hung in; however, and I’m quite glad I did. Once I got deep enough in the story, I picked up enough that I was along for the ride. The script was well written, and although there were some tropes of young adult novels, and certain parts of the story were predictable, it was still a great adventure for all ages, and I can easily tell I’ll likely be watching it again to pick up anything I missed. It really has a fantastic story with a lot of heart.

The actors, for the most part, are not well known. Except perhaps for Ben Barnes and Zoë Wanamaker, who plays Baghra, I didn’t recognize anyone, but don’t let that fool you. The cast was exceptional and had me feeling like I knew the actors all along. Jessie Mei Li had no problem carrying the show. I could also feel the chemistry between her and both Renaux and Barnes.

The other standout performances were by all three of the Crows. Brekker and Ghafa’s relationship with was interesting to say the least, and Young as Fahey brought some fun comedic moments.

The other characters I really liked (and would have loved to have seen more of) is Danielle Galligan as the Heartrender Nina Zenik and Calahan Skogman as the drüskelle from Freja, Matthias Helvar. I think I enjoyed the start of their potential romance the most.

The look of the series is breathtaking, and they have done such a terrific job recreating the world, which feels somewhat familiar yet also feels unique, from the Little Palace to the forest. The costumes only add to this. The special effects are also well done, and I was especially delighted by the look of Morozova’s Stag.

If you are looking for a new fantasy series you can get swept up in, I recommend you check out Shadow and Bone. It’s got a wonderful adventure with an excellent story to get behind. I find myself excited to see what comes next in the epic tale.