On Friday, Netflix drops the first eight episodes of season five of the fan favorite, Lucifer, with all the main cast returning.

Based on the character created by Neil Gaiman for the Sandman series, the show follows Lucifer Morningstar, played by Tom Ellis, a fallen angel, who in defiance of his father, abandons his throne in Hell for LA where he owns a nightclub, Lux. After an acquaintance is murdered, Lucifer finds himself in the presence of Detective Chloe Decker (Lauren German), and he eventually becomes her partner as a consultant for the LAPD, where they battle angelic, demonic, and even human threats.

Over the course of the series, Chloe discovers that Lucifer is actually the devil. At the end of season four, she accepts Lucifer and admits to him that she loves him, making him realize that it was she who was his first true love and that the prophecy will come to pass, unleashing evil on the Earth. After a kiss, Lucifer leaves to send the demons back and once again rule over Hell. 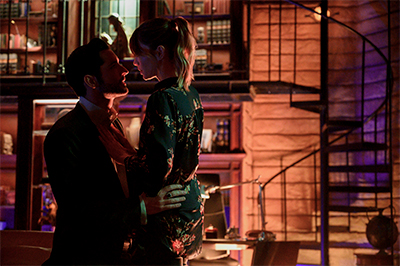 After his stint once again as the warden of Hell, Lucifer eventually makes his way back to his home in LA and his friends, but things may not be as he left them, with his twin, Michael (also Ellis), having come to Earth trying to take over his identity and life. Can Chloe and the others discover the truth?

The season has many different flavors, bringing excellent drama and of course its signature comedy. While episode three brings the meta and a bunch of laughs as the show pokes fun of itself, episode four takes a different approach with a film noir episode that takes place in the 1940s and reveals what is essentially Lucifer’s first case. Some episodes focus on Michael, while others bring in another chilling adversary. It’s a nice selection between the eight. 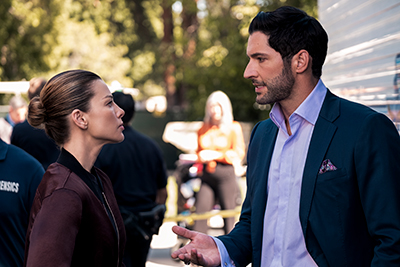 I very much enjoyed Michael as the antagonist of the season. It was a treat to see Ellis play both characters; the actor is quite impressive this season. It is easy for the audience for the most part to differentiate between the two, not just because of his accent, but also the mannerisms and personalities of the characters that he embodies so well. I also love how Michael is in many ways opposite of Lucifer, which definitely is reflected in his powers.

There are also some terrific interactions between Mazikeen and Michael and a thrilling and awesomely choreographed battle between him and Amenadiel (D.B. Woodside).

Thankfully, there are also quite a few adorable, hot, and often game changing moments between Chloe and her man, but I won’t reveal which twin is involved or how. 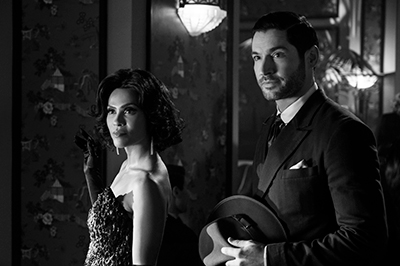 One of the many things I enjoyed this season is the shift of character focus to Chloe at certain times. In previous seasons Lucifer was always finding connections to his own life in the cases, using them to work through his problems, although granted, not quite as selfishly as the series went on. This season, the cases seem to connect to what’s happening in Chloe’s life. The detective also goes to see Dr. Linda (Rachel Harris) at times and does the same thing Lucifer always does: completely misinterprets her advice. I appreciated the switch, and German was outstanding.

There were great character moments with all the main cast throughout the season which is fantastic. I love seeing all of the supporting characters continuing to become even more interesting and getting even more fleshed out. This season we get to learn more about Maze (Lesley-Ann Brandt)’s past as she still struggles to find her place, Amenadiel learns what it takes to be a father, and Linda reveals a secret. This season Ella may find some romance, and Dan (Kevin Alejandro, who also directs 5.08) has a very interesting storyline in the present as he works to move on from Charlotte (Tricia Helfer). 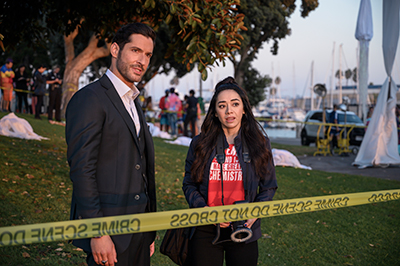 Season five was extraordinary and one of the best yet. I found myself both laughing and crying through the lively season and was always entertained.

There is so much packed in the first half of the season that fans are going to love, and I’m really excited to see everyone’s reactions, especially fans of Deckerstar.
Twitter
BotonSocial por: SocialEmpresa
Category: TV Reviews & Recaps