This year, just in time for Halloween, Fathom Events featured an encore presentation of both versions of NT Live’s Frankenstein on two nights only in most locations, to commemorate the 200th anniversary of Mary Shelley’s novel. The show features both Benedict Cumberbatch (BBC's Sherlock, Avengers: Infinity War) and Jonny Lee Miller (Trainspotting, Elementary) as Victor Frankenstein and his Creature, alternating roles for the second presentation as they did every other night during their original performances at the National Theatre stage in London in 2011 where the film was captured live. In most areas, on the first showing on October 22nd, Cumberbatch was featured as the Creature, with Miller on the 29th. 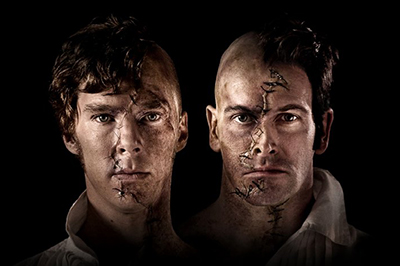 Unfortunately, the show was only in certain theaters and none near my location. Thankfully I was able to see both performances but did have to travel about an hour each time. It was worth the trek.

I decided even with the distance to travel for both shows, as I wanted to see both actors’ interpretations of the characters.

The presentations open with a behind-the-scenes look at the production. Director and Academy Award-winner Danny Boyle (Trainspotting, Slumdog Millionaire) discusses the actors switching roles and also about some of the choices he made with the production. He also talks about how the Creature awakens without understanding the world or how to use his body, but with a fully developed brain, which is why he is able to progress so far in the short period of a few years over the course of the play. 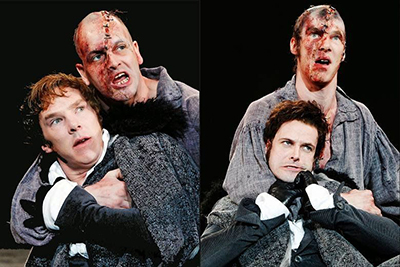 The story, by Nick Dear, is based on Shelley’s original novel, but devotes equal time to the Creature and his point of view. The narrative follows Doctor Frankenstein’s Creature as he emerges into the world to the horror of his maker. Abandoned and without even a name, the Creature must navigate his way through a harsh world while discovering the true depths of man’s cruelty, as his maker deals with the ramifications of the scientific atrocities he has committed.

While both actors are absolutely brilliant in both the roles, for me, Cumberbatch edged out Miller. While out of the two I preferred to see him as the Creature, just because the performance evokes such strong emotions, as Doctor Frankenstein, Cumberbatch created a more nuanced performance than Miller, for me evoking sympathy for the scientist as well. 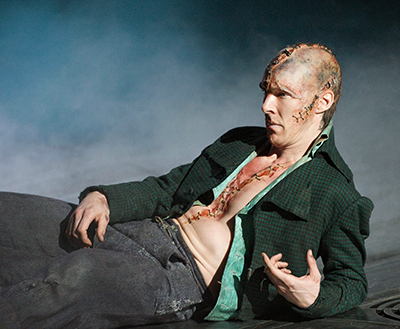 While most showings are over, there are a few theaters still presenting both versions of the play during November, such as at the IFC center in New York and some art centers and cinemas. If you have time, it’s really worth the price. It’s a rare chance to see the fantastic performances, as the play is not available to watch other than in the theater. If you can only see one, I recommend Cumberbatch’s Creature, but it’s well worth the double admission and time to see both versions and both of the actors’ choices.
Twitter
BotonSocial por: SocialEmpresa
Category: Film Reviews